What’s the deal with “murder hornets?”

News outlets and social media have been buzzing about how “murder hornets” have now been spotted in North America.

The New York Times has a writeup on the situation—it’s what kicked off the interest, I think—but in case you’re out of free articles for the month, here’s the short version:

There’s a giant species of hornet native to Asia, named “the Asian giant hornet,” or Vespa mandarinia in scientific terms. As hornets go, it deserves the title; it can grow to be nearly two inches long, and its stinger is almost a quarter-inch long—being stung by one isn’t pleasant, as this video demonstrates.

Some people have taken to calling it the “murder hornet,” a title that is also, unfortunately, somewhat earned. While around 50 human deaths per year occur in Asia due to “murder hornet” stings, most people need to be stung by several hornets at a time for the stings to be fatal. But the nickname is more apt when it comes to how the hornets treat honey bees. A single hornet can kill up to 40 bees a minute, and just a handful of hornets can exterminate an entire bee colony in a few hours, after which they will take over the hive and feed the bees to their own young. Honey bees, however, do have an amazing defense against hornets of all kinds—heat-balling, a process where many honey bees gather together, flap their wings, and use their collective body heat to cook their unwanted visitors, killing them in the process.

Check out the picture below for a still shot of one of these bee balls in action. So cool! 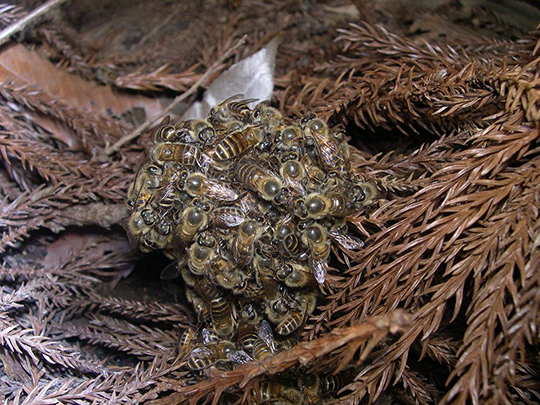 It doesn’t appear that there have been any more giant hornet sightings in 2020 after they were spotted in Washington state and Vancouver last year, but once they’re here, they could be difficult to get rid of. So scientists are working hard to track down any giant hornets and their hives. They’re using wasp traps—including some baited with special pheromones meant to attract queen hornets—and experimenting with thermal-imaging tools. Because the hornets’ nests have an internal temperature of about 86º F, thermal imaging might allow scientists to spot their heat signatures from a distance. Also, we might be able to use the hornets’ large size against them—scientists could fit captured hornets with tiny radio-tracker tags.

So how much should we be worrying about the “murder hornet,” and what should you do if you see one? Entomologists say: don’t worry, and take a photo.

While “murder hornets” have the potential to become an invasive species in warmer places, entomologists from the University of Minnesota have stated, “our winters are likely too cold for V. mandarinia to survive here.” We have many other hornets in the United States that are easy to confuse with the giant hornet, so to ensure you don’t kill a beneficial insect, snap a photo on your smartphone and send it to your state’s department of agriculture instead of grabbing the fly swatter.

To tell the difference between the “murder hornet” and other wasps, check out this handy guide from the Washington State Department of Agriculture: 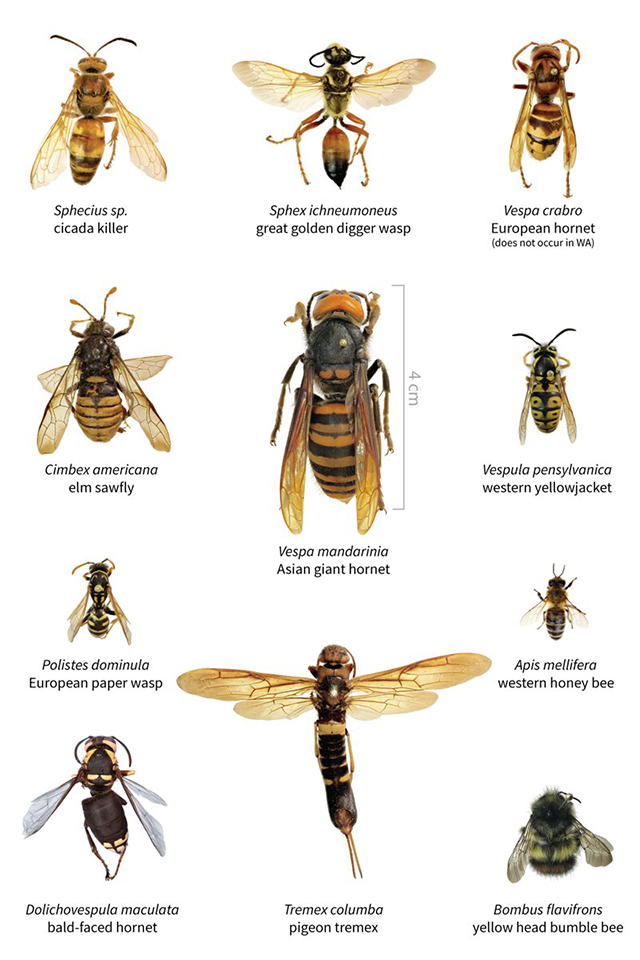