A mystery diatom: living fossil or something new?

Mark Edlund, PhD, senior scientist at the Science Museum of Minnesota and its St. Croix Watershed Research Station, and colleagues from across the country were studying June Lake in east-central California when they suspected they had uncovered the holy grail of their research field: A living fossil! And not just any living fossil, but a living fossil diatom, the most important microscopic group on earth—responsible for the air we breathe, the fish we eat, and the beer we drink.

Living fossils are species that were once known only from the fossil record, but then rediscovered in modern collections, perfectly alive yet seemingly unchanged after millions of years. Coelacanth fish, the Wollemi Pine, the gingko tree, or the horseshoe crab are all living fossils.

Edlund and his colleagues were studying modern samples and a sediment core covering the last 3,000 years from June Lake, one of the few remaining lakes in the ancient Mono Lake Basin, an old lake bed that seems like the perfect place to find a living fossil. The scientists thought they had found a diatom living fossil first described by Albert Grunow and Henri Van Heurck in 1882: A new species we now call Stephanodiscus klamathensis.

Grunow and Van Heurck’s fossil samples came from near Klamath Lake, Oregon, from rocks dated at more than a million years old. The Stephanodiscus klamathensis diatom has since shown up in other samples, always in million-year-old rocks from the western United States.

Was it a living fossil? The diatom living in June Lake (left) sure looked like the fossil diatom discovered in 1882 (right).

The June Lake diatom looked just like Stephanodiscus klamathensis under the light microscope—same size, same beautiful pattern of radial decorations, and a ring of stout spines along its edge. It looked like the living fossil!

But when the scientists placed it under their more powerful scanning electron microscope, differences jumped out at them. Small structures that are responsible for the diatom’s ability to stay suspended in the water, called central strutted processes, were clearly missing in the June Lake specimens. This difference was a game changer, and meant that the June Lake specimens were actually a new species! 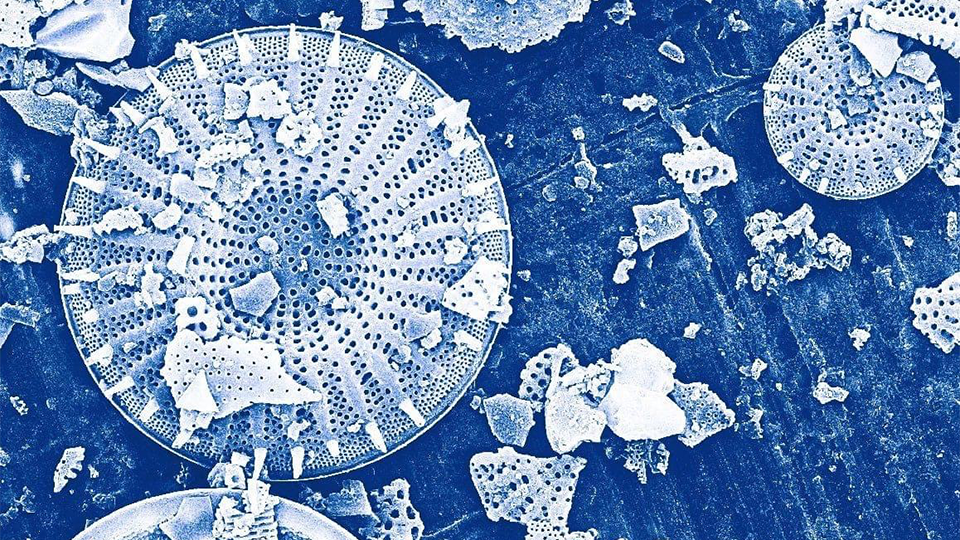 The scientists moved forward, carefully describing their new species and comparing it to every possible related species. Their work was recently published in the journal Diatom Research, introducing their discovery: Stephanodiscus coruscus. Like all new species names, that’s Latin—Stephanodiscus means circle of thorns, and coruscus means “gleaming.” A perfect name for this beautiful diatom! Additionally, its closest living relative turned out to be another old friend; Stephanodicus mongolicus, from Mongolia’s ancient Lake Hövsgöl, which Edlund had described several years back.

So, the June Lake specimen wasn’t a living fossil. Just a brand new species! Edlund notes, “That term ‘living fossil’ is a sort of a misnomer anyways, and just a little oxymoronic.”

In biology, he explains, evolutionary forces are always working to shape organisms. Sometimes those forces don’t so much affect the way an organism looks, but those forces instead shape how organisms behave, their physiology, or whether they can thrive. While an organism might appear unchanged, there could be more going on than what initially appears.

“For Stephanodiscus coruscus, selection led to the loss of very small character that was only visible in a top end microscope,” Edlunds says. “And that fossil record in June Lake hints at what other characters on this diatom are being selected for by the lake’s environment. That’s a story for our next research paper!”