Patrick Hamilton, the Science Museum’s director of Global Change Initiatives, is passionate about finding solutions to the challenges our society faces as our climate changes.

Pat is representing the Science Museum as a member of We Are Still In, a bipartisan network of over 3,600 representatives from all 50 states, spanning large and small businesses, mayors and governors, university presidents, faith leaders, tribal leaders, and cultural institutions that are committed to the 2015 Paris Climate Agreement and addressing the causes of climate change. While in Poland, Pat is working to elevate awareness among We Are Still In members that science centers can be important partners on climate change science and solutions. He is also working on conveying to conference attendees that large segments of the U.S. population and economy remain committed to climate action despite the absence of federal leadership to parties from other countries.

We are proud to have Pat representing the museum on this international stage. He'll share frequent updates about his time at COP24 here on Plugged In, as well as on his social media accounts. Follow along on Facebook and Twitter! 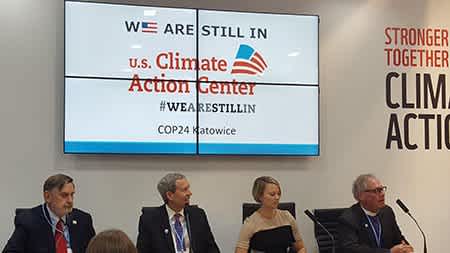 Sunday, December 9
Given the present administration’s indifference to climate change, the U.S. does not have a an official presence in the exhibition pavilion at the conference. So Bloomberg Philanthropies, Mars, Inc., and NextGen America stepped up to fund the U.S. Climate Action Center at the COP24 conference to convey to the over 30,000 people attending from around the world that climate change still remains a high priority for many Americans.

I had the opportunity to participate in the We Are Still In kick-off panel in the U.S. Climate Action Center last Friday morning. Joining me (pictured second from left in the photo at right) on the panel were Ashley Allen, Mars, Inc; Bishop Marc Andrus, Episcopal Church; and Bill Somplatsky Jarman, Presbyterian Church.

Monday, December 10
One of the panels at the U.S. Climate Action Center focused on the importance of cities in addressing climate change. Michael Northrup from the Rockefeller Brothers Fund emphasized the importance of dramatically improving the energy efficiency of the millions of existing buildings in U.S. cities. He pointed out that a number of recently constructed large buildings in the U.S. and elsewhere have achieved remarkable feats of energy performance, even net zero energy, but that their contributions to addressing climate change pale in comparison to the enormous inventory of energy-inefficient existing buildings.

The Science Museum of Minnesota has much to contribute to raising awareness of the enormous potential for existing buildings to up their levels of energy performance. The museum’s advanced heat recovery retrofit, implemented several years ago, has cut our purchases of hot water for heating by 65 percent. That's an annual savings of $300,000 and a simple payback of three years. The museum has cut its electricity consumption every year for the past seven years, as well.

The Science Museum has hosted numerous professional tours of is energy efficiency retrofits. The next one will be on January 10, when it will host the Sustainable Buildings 2030 seminar for the sixth year in a row, in partnership with Xcel Energy, the University of Minnesota’s Center for Sustainable Building Research, and the City of Saint Paul.

Tuesday, December 11
We Are Still In staff did impressive work over the weekend arranging back-to-back meetings yesterday between me and other We Are Still In representatives with members of the French, German, and Alliance of Small Island States (AOSIS) governmental delegations. AOSIS is a coalition of 39 small island and low-lying coastal countries that share similar development challenges and concerns about the environment, especially their vulnerability to the adverse effects of global climate change.

The purpose of the meetings was to convey that, according to a recent study by America’s Pledge, current federal commitments and market forces are already on a path to decrease U.S. carbon dioxide emissions to two thirds of the original U.S. target under the Paris Agreement, and that broader engagement on climate change by the U.S. has the realistic potential to reduce emissions to nearly the entire goal that the U.S. committed to under its Paris pledge. Each of the three bilateral meetings began with a brief summary of the report by its lead author, Nathan Hultman of the University of Maryland, followed by me and others providing substantiating details.

I related Xcel Energy's latest announcement that it intends for its electrical power generation to be 100 percent carbon free by 2050, as electricity in Minnesota becomes low and even zero-carbon efforts are ramping up to replace the use of petroleum and natural gas in transportation and buildings with clean electricity. I also discussed the role of the Science Museum of Minnesota and its umbrella professional organization, the Association of Science/Technology Centers, in encouraging science centers across the U.S. to become more engaged in climate change solutions, given that they attract over 80 million visits annually and are trusted sources of scientific information.

The messages from my We Are Still In colleagues and I were very well received. President Trump’s hostility to the Paris Agreement is virtually the only climate news that international audiences receive from the U.S., and so the national delegations were relieved and encouraged to learn that a diverse set of entities are achieving significant reductions in greenhouse gas emissions in the U.S. The meeting with AOSIS Ambassador Ahmed Sareer was particularly poignant. He described the 39 AOSIS countries as frontline nations that face the prospects of catastrophic losses in the near future without more aggressive global climate action.

Friday, December 14
It is Friday afternoon here in Katowice, Poland. The international climate conference wraps up for me in a couple of hours, while negotiations will continue into the night and maybe through the weekend. Regardless of the details of the final agreement, here are my key take-aways from the conference:

I look forward to accelerating this work with everyone who appreciates the grave implications of climate change and the enormous potential for climate change solutions to improve and secure the lives of children growing up today.

Goodbye for now, and thank you to tuning in to the Science Museum’s work at the global climate conference.