The emerald ash borer, an insect pest that was accidentally introduced into the U.S. back in the 1990s, appeared in the Twin Cities several years ago. Efforts to remove and destroy infected ash trees as soon as they were detected helped slow, but did not stop, the spread of the insect. Now, the emerald ash borer is so widespread in the Twin Cities that any ash tree not inoculated with insecticide will likely die within five to ten years.

Because of threats like the emerald ash borer, the race is on to rapidly ramp up urban reforestation efforts. That race comes with its challenges. Container-grown trees are very costly and would break the budget of most city forestry departments. Bare-root trees are much less expensive but, as their name implies, they have very few roots and are much less likely to survive the shock of being transplanted. That’s where gravel beds, like the one on the Science Museum’s Kellogg Plaza, can help.

Gravel beds can be of any size, but need to hold about 12 to 18 inches of gravel. Inexpensive bare-root trees can be planted in the bed in spring, irrigated over the summer, and then pulled and transplanted in a more permanent location in the fall. Their time in the gravel bed allows trees to develop thick networks of rootlets, giving them a much better chance of surviving transplantation.

Thanks to funding from the Minnesota Pollution Control Agency, the Science Museum, the City of Saint Paul's Forestry Department, and Mississippi Park Connection (the non-profit partner of the Mississippi National River and Recreation Area) excavated part of one of the planters on Kellogg Plaza and replaced it with pea gravel in October of 2016. The bed not only provides a safe place for bare-root trees to grow stronger over the growing season, but it's also an example of a forward-thinking, simple sustainability solution for visitors and passers-by.

Since 2017, the Science Museum has welcomed staff and volunteers from Saint Paul Forestry and Mississippi Park Connection each spring to plant bare-root trees in the gravel bed. The trees receive water throughout the spring and summer from the Science Museum’s irrigation system, giving them an opportunity to develop a more robust root system. In the fall, volunteers return to dig up the trees from the gravel bed and transplant them along the Mississippi National River and Recreation Area corridor, often very close . (In fact, you can see the results of one season of gravel bed cultivation very near the Science Museum - at the intersection of Shepard Road and Randolph Avenue in Saint Paul!)

The before and after appearances are striking. The bare-root trees arrive at the museum in the spring with only minimal roots. 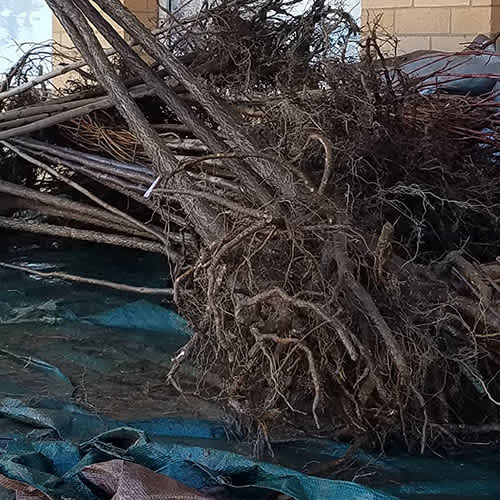 They leave for their permanent destinations in the fall with thick, healthy root systems that set them up for success in transplantation. 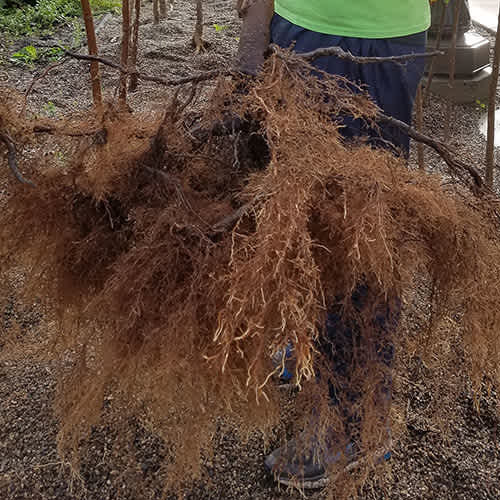 Thanks to another batch of Mississippi Park Connection volunteers, this year’s cohort of bare-root trees went in last week. The batch includes Kentucky coffee trees, basswood, and Dutch elm disease-resistant American elms. Look for them on the plaza during your next visit!