By boat and by ice: Field trips with water scientists

It might be a hot and sunny day in summer or a cold and windy day in fall when Science Museum scientists launch their boat onto one of Minnesota’s many lakes. It might be a vast body of water on the Canadian border, or just a couple hundred acres in farm country. They might be studying its past, present, or future.

Wherever they are, the scientists are seeking answers to urgent questions about the threats facing the world’s water, and what can help keep it clean and healthy. These experts pursue knowledge about water and climate—subjects that are critical to humans thriving on Earth.

While the search also includes plenty of work in the lab or on a computer, collecting real world information is critical. The lakes themselves can share a lot of answers — if you know how to ask the right questions. It can be challenging physical work, and it always takes a lot of brainpower.

There are two main ways the scientists work: either closely watching current conditions, or extracting clues about the past—and understanding when and why things change. It takes specialized equipment and a lot of experience.

Set out on an expedition with the scientists

May 2016: Dr. Adam Heathcote and technician Alaina Fedie drive 150 miles southwest to St. James Lake in Watonwan County, which is plagued by harmful algae. They cruise across green water, take measurements of clarity and chlorophyll and more, and return to the landing. On the way home, they stop at Madison Lake in Blue Earth County and do it again. They repeat this drill once a month during the open water season.

A day in the field actually begins the day before. The team loads up a van or truck with equipment at the St. Croix Watershed Research Station, where the water scientists are based. Everything from life jackets to anchors to high-tech sensors is stowed away. Forgetting one piece of equipment could ruin a whole day, so checklists are checked, and checked again.

In the morning, the crew hitches up the boat. It may be the Hurricane deck boat for larger lakes, or the trusty jon boat. For remote areas, it’s that simple and ancient craft: a canoe (or two).

When everything is ready, they fill their coffee cups and hit the road.

Science Museum scientists regularly study water across the Midwest, so some trips take them to the far corners of Minnesota and beyond, while others are right down the road—in the St. Croix River or nearby lakes. They may spend hours behind the wheel, or just a few minutes, or sometimes, they spend a night or two in a hotel. 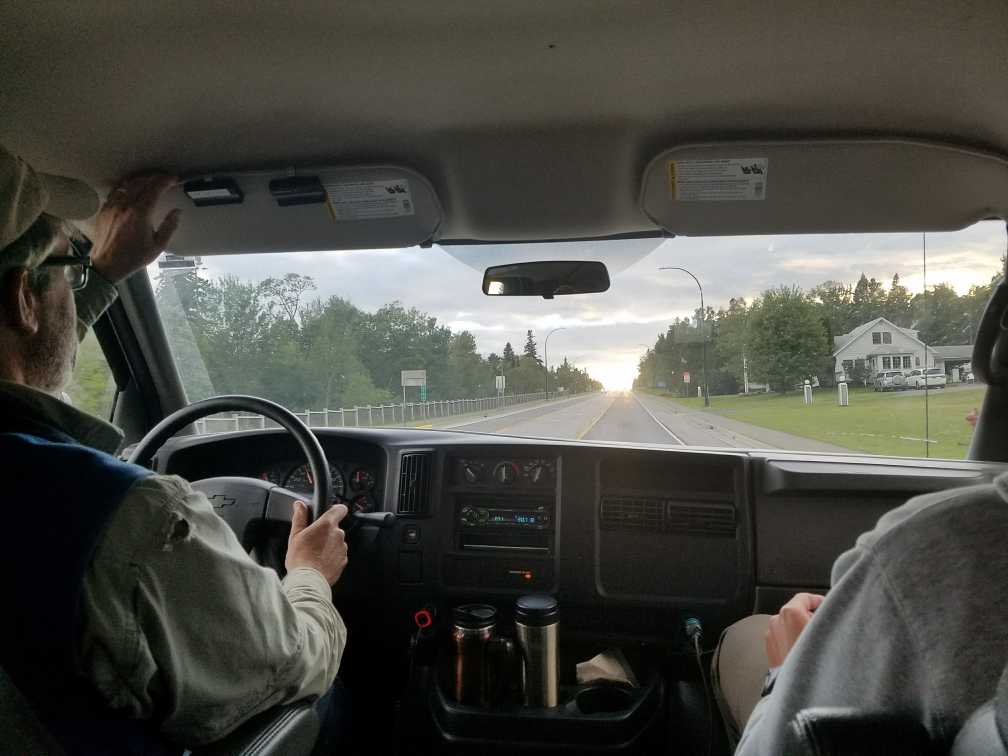 September 2017: Drs. Mark Edlund and Adam Heathcote are on the road before dawn, eat lunch 250 miles north in Grand Marais, collect and process sediment samples from wild Trout Lake in a remote area of Cook County, and return to the lab with their samples after dark. The trip includes 10 hours of driving for an hour or two’s work on the lake—and 400 years worth of mud.

When the crew arrives at the boat launch, they transfer equipment from the vehicle to the boat. Again, checklists are checked.

It’s pretty obvious that the researchers are not typical anglers or recreational boaters. The unique vehicles, boats, and equipment they use often attracts interest from other landing users. The scientists will take questions about what they’re doing and why, and about the health of the lake a few feet away. They will ask about personal experiences and observations. It’s an informal but invaluable form of outreach, connecting lake users, who may know the waters well, with the people who study the lakes.

Once everything is ready, they put the boat in the water. This is one point where experience definitely pays off, since backing a boat on a trailer down a ramp is an acquired skill. The researchers have it down to a science.

With the whole crew aboard, the captain turns on a GPS unit and follows it to a specified point on the lake. This might be a dedicated site where measurements are taken regularly, or a predetermined point based on studying lake maps and determining the best spot to get good data. 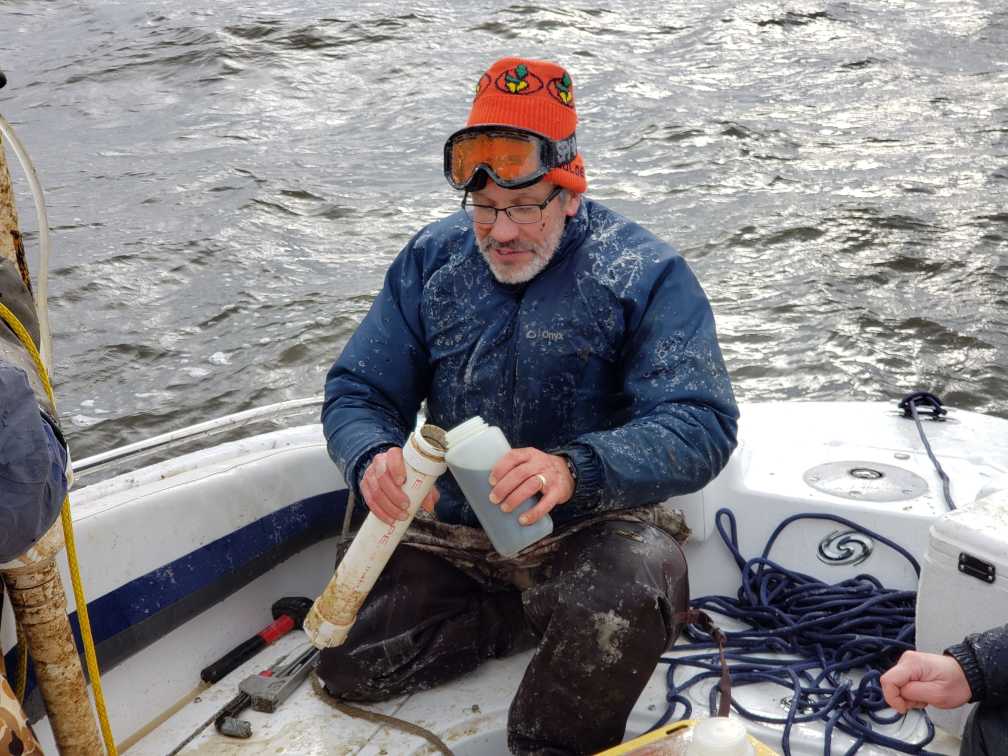 Late October 2019: Edlund and Heathcote battle below-freezing temperatures, an ice-covered boat, and wind-driven waves on Lake of the Woods. They have to extend the trip an extra day after conditions force them off the lake one afternoon. They are frozen and battered. With some help from partners at the Red Lake Department of Natural Resources, they get the job done.

When the scientists reach the coordinates, they drop anchor and get to work. Everyone has a job. Measurements are taken and carefully recorded. What exactly each person does depends on the research questions.

Typically, one scientist slowly lowers a heavy cable with a cylindrical device on the end overboard. This instrument measures water temperature, oxygen levels, algal density, and more at regular intervals from the surface to the bottom, and saves all the data to be downloaded and analyzed back at the lab.

Another researcher collects bottles of water. Some of it might be immediately pumped through a filter, which captures all the algae, making it easier for later analysis.

Someone always takes a Secchi disc reading. This 150-year-old technology is truly time-tested. A simple circle with black and white quadrants, lowering it into the water lets almost anyone easily measure water clarity. Wherever the disk disappears from view, the researcher records the distance on the line it hangs from. Learn how to make your own Secchi disc at home and measure water quality wherever you are.

The Research Station has been a pioneer in analyzing sediment cores to determine past conditions not just in a lake, but on the landscape that drains into it. Mud is laid down on the bottom like pages in a book, each page containing clues to conditions centuries ago. For some studies, they bring along numerous long metal rods and coring instruments to grab tubes of mud up to six feet long from the bottom.

The Research Station has been a pioneer in analyzing sediment cores to determine past conditions not just in a lake, but on the landscape that drains into it. Mud is laid down on the bottom like pages in a book, each page containing clues to conditions centuries ago. For some studies, they bring along numerous long iron rods and coring instruments to suck tubes of mud up to six feet long from the bottom. 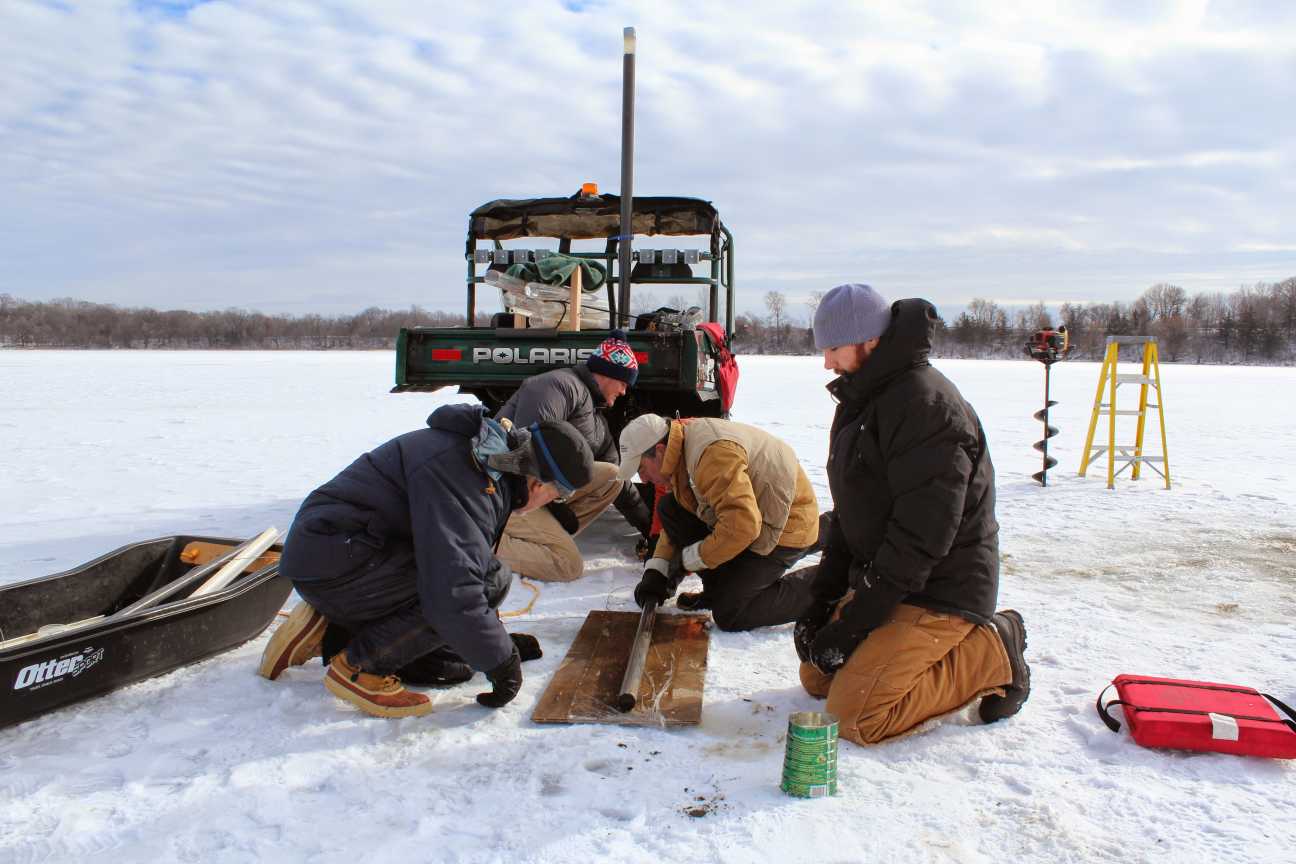 January 2015: The crew uses an auger to drill holes through a foot of ice on Miller Lake, in Carver County. Gathered around the hole, they perform some calculations, plunge a tube into the water and into the mud on the bottom, and then pull it back up. Winter is a great time to take sediment samples. Once the ice is thick enough, it provides a much steadier and more spacious working surface than a boat bobbing on liquid water. There’s also no risk of drifting away from the study site.

In recent years, the scientists have begun putting complex contraptions in lakes and leaving them there all season. Anchoring these research buoys to the bottom, the scientists attach numerous sensors and other instruments to a rope climbing through the water. It logs conditions every 30 minutes all day, all night, all season.

They usually revisit the sites throughout spring, summer, and fall to collect water samples and take measurements that will complement the data being recorded by the buoys. They’ll also take the chance to download data from the buoys, securing it against the possibility of later loss. That means flinging a grappling hook on a rope off the boat and trying to snag the buoy lines, then dragging the device aboard.

All those measurements capture a moment in time. The mud on the bottom can contain clues to conditions centuries ago. The buoys capture a season. Water samples capture a snapshot of the present. Putting all the information into complex computer simulations lets the scientists predict possible futures.

Every so often, a scientist will embark on a special expedition to study lakes around the world. Science Museum scientists have worked in Greenland, the Canadian Arctic, Mongolia, Florida, and Alaska. The setting and conditions may be different, but many of the same tools are used. Researchers will hike across miles of tundra with a rubber raft on their back, or take a float plane, to reach remote waters. Then they will measure, sample, and take sediment cores.

Boats, buoys, Secchi disks, water samples, tubes of mud: the tools Science Museum water scientists use are many. It’s ultimately their skills, knowledge, and willingness to explore new waters and new questions that lets them make sense of lakes. 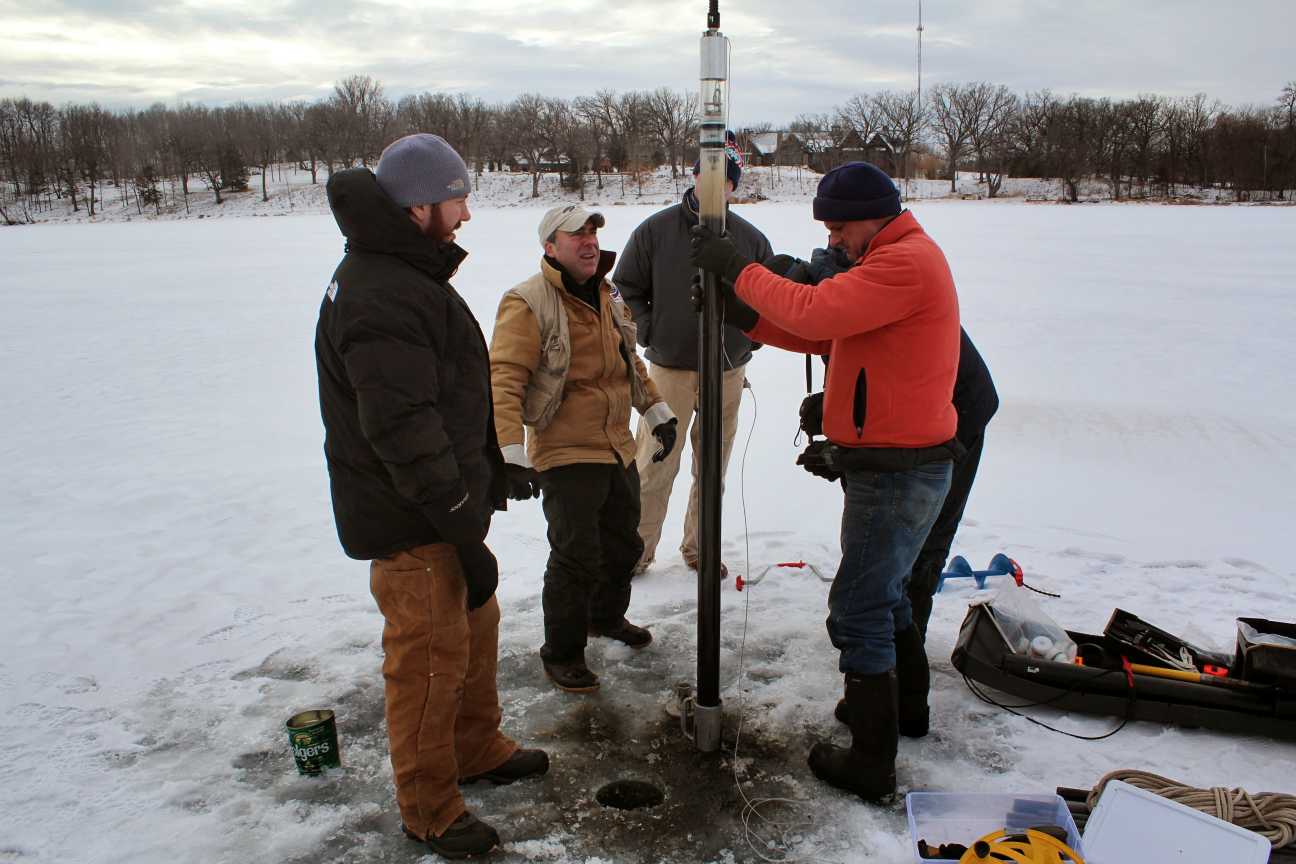