We’re back, and we can’t wait to see you at the Science Museum!
Review our safety guidelines for our reopening.

One flew, one slithered – both have something to tell you.

Its name says it all – TITANOBOA! Bigger than a school bus, it’s by far the largest snake that has ever haunted our nightmares.

The passenger pigeon’s name is every bit as telling. It flew in flocks so thick that James Audubon says one took three days to pass him by.

Introducing two extinct animals – each with an urgent lesson for us – say Dr. Alex Hastings and Dr. Catherine Early, a paleontologist and ornithologist at the Science Museum of Minnesota.

We have a life-sized model at the museum. It's eating a crocodile whole.

Alex was working on his Ph.D. when he received a box of old bones from a coal mine in Colombia. Labeled crocodiles, he quickly saw that they looked more like a boa or anaconda.

"Except the bones were as big as my fist," he says.

At first, Alex and fellow researchers thought they'd stumbled upon a Mosasaurus, a giant seagoing reptile. The problem was that these specimens were found in sediment deposited millions of years after their extinction.

As they came to call it, Titanoboa, ruled a watery, murky, vegetation-draped tropical area that was a perfect hideout for a 1.25 ton predator. "We have no reason to believe the snake was venomous," Alex says. "And it didn't need to be. It could easily crush a crocodile like a dry leaf."

Picture a mourning dove. Only fancier and bigger.

Fast forward some 60 million years and the eastern half of North America is plastered with passenger pigeons. One observer said they were so numerous they'd darken skies, sound like thunder, and pour into trees in search of acorns and other nuts like a feathery waterfall.

Always gathering in huge flocks, the bird was an easy mark for hungry and, unfortunately, sporting Europeans. Catherine read about one competition in which a shooter bagged 30,000 of them. "Within a lifetime, we went from billions of these birds to none," she says. 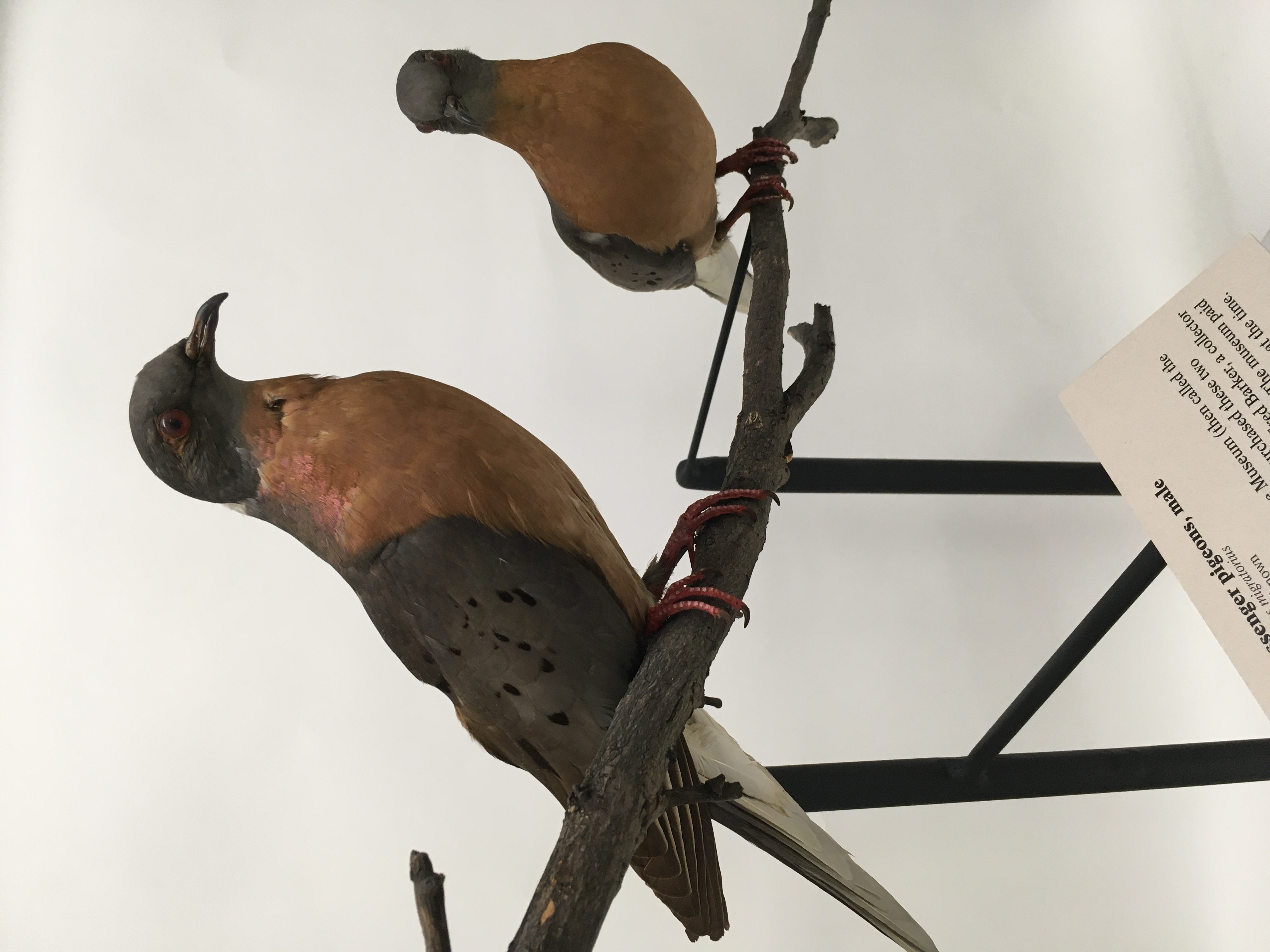 Extinction is a natural pattern – but not at these rates.

For Titanoboa, the lesson is preparation. The super snake's kryptonite was natural climate change. In this case, it was probably shifting tectonics that disrupted ocean currents and lowered temperatures. Warm-blooded animals that could handle the cooler, drier conditions were now kings and queens of the jungle.

Flip that script, Alex says, and the inverse will be true. Global warming will create a climate in which not only will reptiles thrive, but bugs and the diseases they carry will thrive, too. If we're going to continue to heat the atmosphere, he says, we need to be prepared for "things like malaria pushing into new habitats."

Four passenger pigeons in the museum collection. Eggs, too.

Humans have come to understand the importance of biodiversity and how, by just pulling one species out of the food chain, we can upset everything, including our own species' survival.

But Catherine poses another question: These animals, she says, have as much right as we do to live here on Earth. How can we, in good conscience, take that away from them?

We can’t wait to see you!

Weekends at the museum are back. Purchase tickets in advance today.