A new diatom is discovered

A new diatom genus and species, Fascinorbis illustris, was recently discovered and reported in the journal Diatom Research by researchers from Indiana State University, the Science Museum of Minnesota, and the University of Arkansas. Diatoms are a common type of microscopic algae characterized by having shells made of glass. They’ve been around for almost 200 million years and—think diatoms aren’t important?—the oxygen they produce with their photosynthesis is responsible for every fourth or fifth breath you take!

Where do scientists find microscopic discoveries?

If you’re going to try to discover a new diatom, your best bet is to travel to the ends of the earth or at least where other scientists haven’t been. Researchers at the Science Museum have discovered new species from the Arctic, Mongolia, Siberia, and Africa, but sometimes new species show up right under our noses. Minnesota’s Grand Marais harbor is home to Hannaea superiorensis, which was discovered in 2005 and may be endemic or only found in our upper Great Lakes.

For this new discovery, we did the opposite and went back in time, another place most scientists haven’t been. In southern Idaho, huge 9-million-years-old Miocene outcroppings known as the Chalk Hills Formation are exposed, a name that describes the formation’s characteristic look.

But “chalk” belies the Formation’s real reason for being white; the rocks are formed of gidzillions of those glass shells from dead diatoms mixed with clays that were deposited at the bottom of a huge lake. Fascinorbis illustris was big, a giant so to speak, among the microscopic diatoms, and lived in one of many large lakes that filled western North America’s Great Basin during the Miocene. Large, round, brilliant and radiant like a sunburst (that’s what the Latin illustris means), it could be nearly 100 micrometers in diameter. Micrometers is how we measure diatoms. It’s abbreviated µm; one µm is a one millionth of a meter or one thousandth of a millimeter. So for a 100 µm specimen of Fascinorbis illustris — that’s about 1/10 of a millimeter. That’s big for a diatom, just not big enough to see without a microscope. 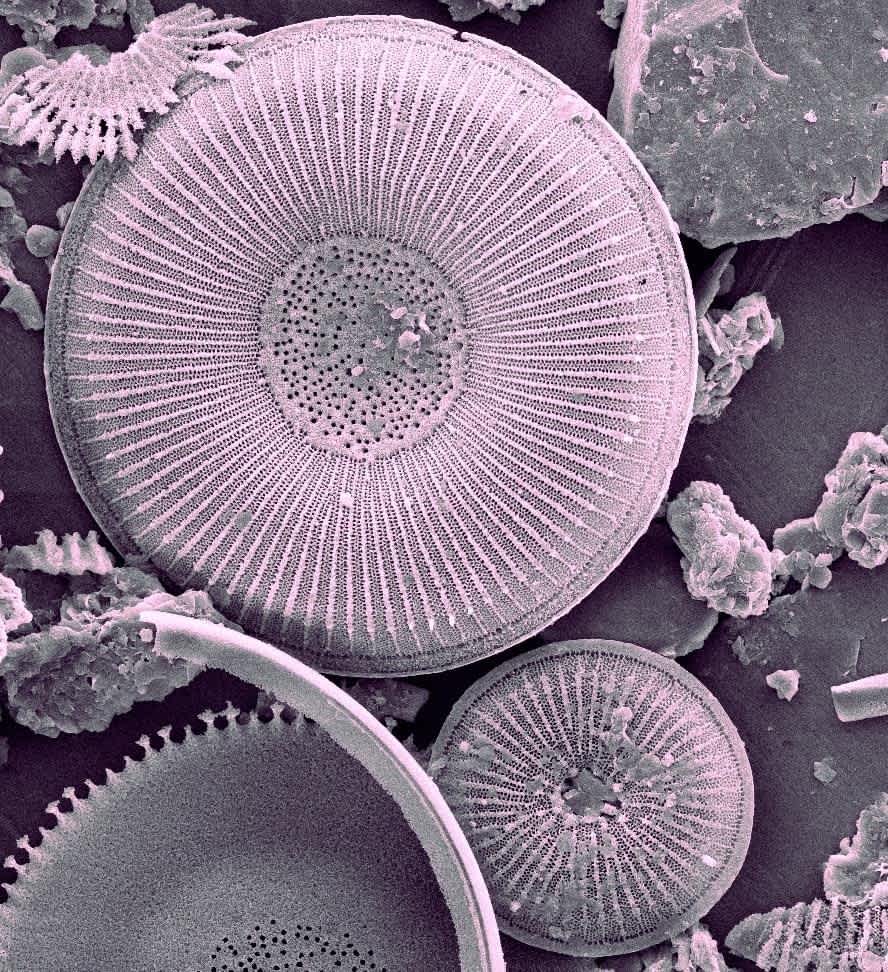 So fire up your microscope and take a good look at the image above. In the scope, we see those large round cells, but also see a lot of small cells around it. That’s another secret of diatoms—we’ll talk about that in another post. Basically, the older they get, the smaller they get. The small ones are the same new species!

Its microscopic characteristics tell us Fascinorbis was a transitional form—an Archaeopteryx in the diatom world—a branch on the evolutionary line that led to many of today’s most common diatoms.

That’s why big discoveries are sometimes small. Because no matter what, you’ll still need a microscope to see the incredible beauty of this giant diatom!