The Apostle Islands in Lake Superior are home to one of North America’s newest species. It lives on the bottom of a lagoon on the Apostle’s remote Outer Island, but you’ll need a microscope to see it—it’s only 1/25th of a millimeter long. Semiorbis eliasiae is a diatom, a type of microscopic algae that has a cell wall made of biologically produced glass. 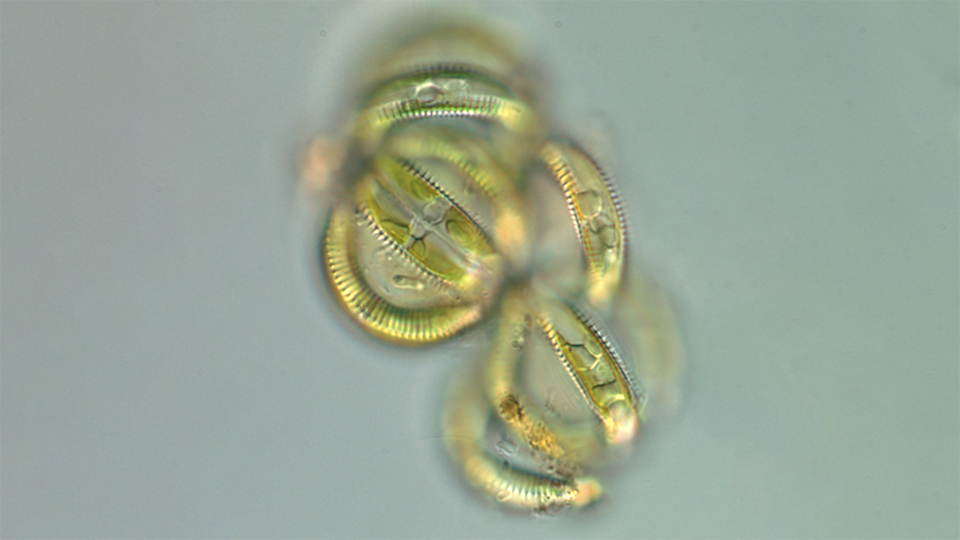 The microscopic shells of Semiorbis eliasiae were the first hint that Science Museum of Minnesota’s Dr. Mark Edlund and Dr. David Burge, lead researchers on a recent paper in the international journal Diatom Research, had stumbled onto something new. The C-shaped shells covered by ridges told them this diatom belonged in the uncommon diatom group or genus Semiorbis, but the Outer Island samples didn’t quite look like the other three Semiorbis species.

In partnership with the National Park Service, Drs. Edlund and Burge collected more samples and reached out to colleagues familiar with this group of diatoms to compare the Outer Island collections to other known species. Using high-powered microscopy and shape analysis, all the data suggested they had discovered a brand new species!

The new species was named Semiorbis eliasiae in honor of Joan Elias, a retired water quality specialist from the National Park Service. New species are fully recognized only when they have been published in a scientific journal and documented with a description of their characteristics, how they can be differentiated from other known species, and the samples permanently deposited in museum collections like the Science Museum of Minnesota, the Academy of Natural Sciences in Philadelphia, and The Canadian Museum of Nature.

The description of the new species included one very special piece of evidence for this rare diatom group—the first-ever published picture of living Semiorbis. Those C-shaped cells are joined together in spherical colonies that live on the bottom sediment of the shallow Outer Island Lagoon.

Historical studies by Edlund and the National Park Service show that Semiorbis eliasiae has been living in the Outer Island Lagoon since at least the 1950s; however, its fate is uncertain due to recent storms that have breached the sandbar separating the lagoon from Lake Superior. The sandbar has reformed, but the lagoon is much smaller now—and hopefully—still home to North America’s newest species.

Cells of the new species Semiorbis eliasiae from Lake Superior’s Apostle Islands live in spherical colonies (center) and have spines and ridges on their outer surface when viewed in a light (left) or scanning electron (right) microscope. (Credit: M.Edlund, SCWRS, )