This installation, featuring two sandhill cranes, celebrates the impressive migratory birds, the lands they need to survive, and recycling household materials into something beautiful. Created by local artist Chris Lutter-Gardella, each crane will be uniquely crafted out of recycled materials. 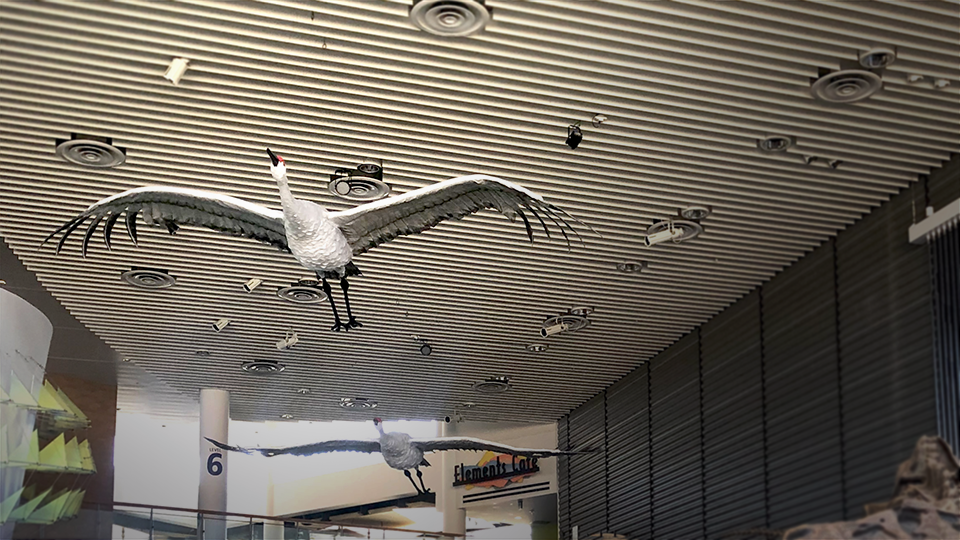 The art installation will be on display in the Science Museum lobby starting June 18, 2021. We invite you to visit the cranes and explore the stories behind the hundreds of breast feathers, which are being created by students across the Twin Cities involved with Science Museum programs, including our Kitty Andersen Youth Science Center and Full STEM Ahead.

What are sandhill cranes?

Sandhill cranes are large ivory and grey birds with red heads. They have been around for a long time—scientists have found fossil evidence dating them back to at least 2.5 million years ago!

One thing sandhill cranes are famous for is using their massive wings (with a five-foot wingspan) to soar above the clouds and migrate in spring and winter. In flocks of tens of thousands, they head north to their breeding grounds in warmer seasons, returning from the southern United States and Mexico.

These birds and their migratory patterns have meaning to many Minnesotans—bird-watchers enjoy seeing them arrive and make their home in wetlands, Indigenous people have stories tied to centuries of experiencing their migrations, and scientists ask questions about how they travel such long distances.

Chris Lutter-Gardella is a designer, sculptor, theater-maker, and community educator who creates large-scale art from waste-stream materials. You might recognize his work from the Mall of America, which featured his giant monarch butterfly sculptures in the Kaleidoscope exhibition.

Humans have a huge impact on the world through our built environments, pollution, energy consumption, and agriculture. Join Full STEM Ahead youth as they learn about the adaptations needed for migration and create feathers that were used by the artist to construct the giant cranes.