The repatriation process from collection to community

The Science Museum of Minnesota sits on a cliff face overlooking the Mississippi River, and attached to the rock is a state-of-the-art, climate-controlled facility where millions of items are looked after by curators—the collections.

These collections hold everything from fish in jars to commissioned pieces of art to spears from South America to Roman oil lamps from the Mediterranean. Our staff and researchers use specimens from around the world to learn more about life on Earth and share that knowledge with our community.

Many of the cultural items come from Indigenous communities, some of which can and should be returned.

Repatriation is the act of returning objects to the places and people they come from. To many communities, these items are so much more than material things.

For example, the Mohawk community sees seeds as their relatives that provide a connection to past cultural practices, which were interrupted by colonialism. This is true of many types of historical items. Objects associated with funeral and spiritual practices, in particular, are also cornerstones of culture for Indigenous people across the world.

We’ll hear from Jaylen Strong, Bois Forte Band of Chippewa Tribal Preservation Officer, and Dr. Ed Fleming, Science Museum archaeologist, on how repatriation to Indigenous communities works and why it is critical to return items to their rightful places.

Back in 2017, the Science Museum of Minnesota collections team worked with the Bois Forte Band to return a drum and a drumstick to their tribe.

In the United States, museums that receive federal funding are required to follow the Native American Graves Protection and Repatriation Act (NAGPRA). This act requires museums to send inventory lists of human remains, associated and unassociated funerary objects, sacred objects, and objects of cultural patrimony in our collections to federally-recognized tribes in the United States.

The drum falls into the categories of sacred items and objects of cultural patrimony, meaning it is required for ceremonies and a member of the community—that should not have been removed.

Jaylen explains why drums and other items are critical to his community, saying, “We see them not just as physical items, but we believe they have spirits. They are more like our family.”

In the 19th and 20th centuries, power imbalances enabled institutions—museums, academia, and wealthy businesses—to obtain extremely important and powerful materials and items from Indigenous communities. On the one hand, museums collected a lot of artwork and everyday items. These demonstrate a variety of traditions and how they vary across cultural boundaries and change over time.

But lines have been crossed, where collecting institutions also acquired these extremely important, personal, and socially-powerful items that hold history and tradition. And to complicate things, what is sacred and important varies from culture to culture.

Museums are good stewards, but with sacred objects, more care is needed

In museums like ours, artifacts are often treated with physical care. Still, the spiritual or emotional connection isn’t always understood or taken into account as work to preserve items, explains Dr. Fleming. Whether that’s due to a lack of knowledge or because the item is far away from its descendant group, items going unused can be painful for Indigenous communities. 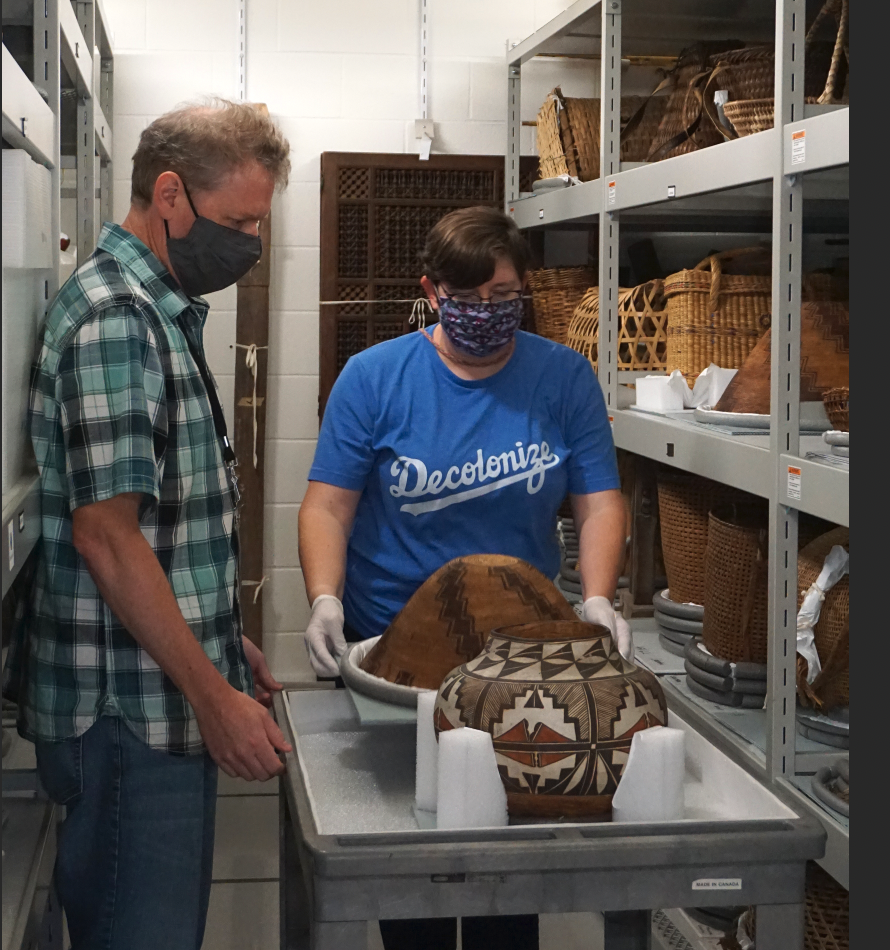 “When museums have a lot of these culturally important and ceremonial objects sitting on shelves, it’s like imagining your own family on shelves, collecting dust,” says Jaylen. His powerful words get to the underlying tensions that have existed between museums, scientists, and tribal nations for over a century.

Tensions that Dr. Fleming explains can come from an unwillingness to change, to release items, or a lack of effort by museums to engage descendent communities and acknowledge the very real conflict sparked by largely white cultural institutions.

However, when museums and tribes work together to consult with descendent communities and repatriate items, healing can happen on both sides.

After many decades away from home, the drum finally made its way back to the Bois Forte reservation.

Some time after it arrived, two elders and their family spent time with the drum. While repatriated items are often talked about in terms of descendent communities—people who live in or are related to past communities in the same area—this drum ended up being even closer to the people who originally made and used it than anyone could have guessed. That day, it was held by the great-niece of the man who used it. She told her kids and grandkids about the drum and her experiences with her uncle.

Jaylen recalls the gathering and how the family interacted with the drum, describing it as “amazing.”

“She was able to tell some stories about what she remembered about her great uncle and the drum. She was talking about when it was used, who took care of it, and even some of the artwork on the drum matched up with what she was saying.”

In the late 1800s and 1900s, ethnographers and anthropologists often purchased items from tribal members. Most of the Science Museum's Minnesotan tribal articles were obtained in this way, either purchased directly by staff or second-hand via donations from other collectors.

At first look, sales can appear to be fair and open transactions. But the reality can be far more complicated. It’s important to remember that during these times, tribes were often poorer than other parts of the United States. This led some people to sell culturally valuable items when they otherwise wouldn’t have.

Objects end up in museum collections in a variety of ways, with many having changed hands multiple times before arriving at a museum. Some may have ended up there through theft or coercion. In summary: Museum collections are often rife with complicated, sometimes dark, histories that need to be confronted.

Despite this, studying culture is still important.

So, how do museums both improve their communication with descendent communities, which in turn will improve our ability to care for collections and better other areas of museum programming? 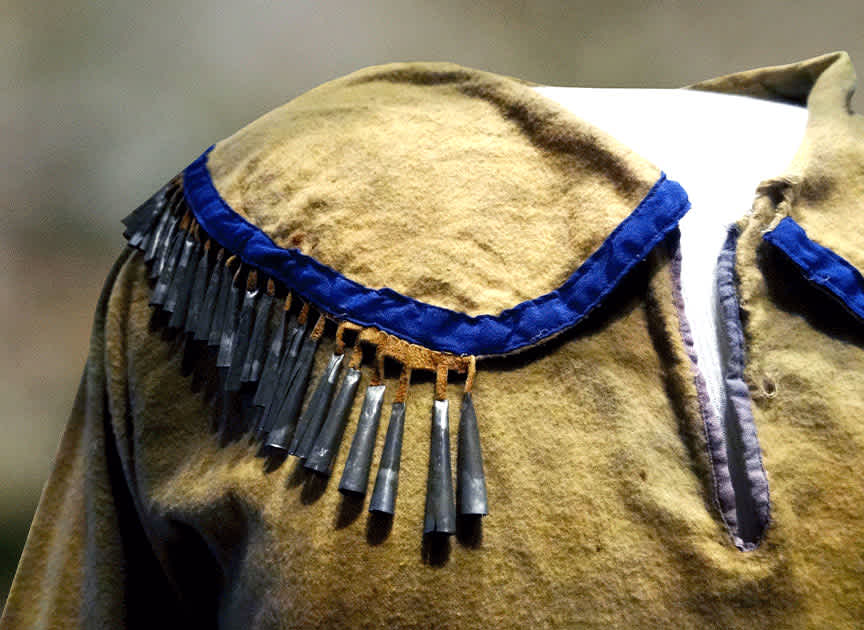 Jingle dress made by an unknown Ojibwe maker, collections ID A86:20:1

Dr. Fleming has a few suggestions for curating collections collaboratively. One way is to commission work from artists instead, ensuring the artists are being compensated in a transparent transaction. Another is to work with communities throughout the acquisition process for big collections to talk about the items before they enter the collection.

What comes next for museums working with tribes?

We asked Jaylen how museums could improve their relationships with tribes. His answer was simple:

“We need more openness and trust between museums and tribal nations.”

Regarding the drum, both sides are glad it is back where it belongs. “I’m really happy we could return it to the community, and I’m really happy that the Science Museum could be a good caretaker of the object in the meantime,” says Dr. Fleming.

And while every tribal nation has its own unique culture and traditions, just like every museum has its own special collection, Jaylen and Dr. Fleming agree that it’s a joyful experience to bring people together to learn about something from outside of their culture.“There is value in having such a broad collection. We can invite people from across the world together to learn from similar, but wildly different, cultures and places,” Dr. Fleming affirmed.

Jaylen chimed in and described an experience attending a traditional knowledge event in Seattle hosted by Yəhaw̓ Indigenous Creatives, saying, “They were using cattails and weaving baskets at the event he invited me to, which meant that a similar plant was being used, but with their own cultural importance. What we use cattails for is different from how they use them, but it’s still significant to both of us. That was a grounding moment for how similar cultures can be while also being unique between each other.”

By continuing to build connections with openness and honesty between museums and tribal nations like the Bois Forte Band of Chippewa, we will improve dialogues across cultures and open our collections up to anyone who wishes to learn from them.

And with openness and continuing dialogue, we will continue to return artifacts to the communities they come from.

Discover tons of free resources you can use virtually or in person created by our STEM education team.