Did you know that you can literally give your throwing arm a boost by using stone-age technology? Keep reading, and I’ll show you how to do it!

Archaeologists have found evidence of spear-throwers dating to around 30,000 years ago, from the Upper Paleolithic period. Stone-age hunters, I imagine, were standing around thinking that those woolly mammoths over there were starting to look a little too confident. Sure, regular spears were alright for hunting, but they wanted something to really put the fear of physics into those hairy pachyderms, something that could bean a mammoth in the dome from a distance that was nothing short of surprising. ("Surprising" may sound like an understatement, but I challenge you to think of something more surprising than the sudden appearance of a flying spear.) Enter the atlatl, a device that would spread across the world and remain in use for tens of thousands of years.

Spear-throwers allow hunters and athletes to launch projectiles over 100 yards at speeds approaching 100 miles per hour. For such a powerful tool, spear-throwers are relatively simple; there are different forms, but all of them are basically a stick with a notch for holding a spear or dart. The shaft of an atlatl essentially lengthens a person's throwing arm—the spear is released from the end of the atlatl instead of from the thrower's hand—and that extra length makes a big difference. The short explanation is that a throwing arm works like a lever, and the longer one end of the lever is, the faster it travels (and the faster the spear perched on its end travels). The longer length of the arc formed by the atlatl and throwing arm also allows the thrower to transfer more force to the spear before it leaves the "grip" of the atlatl. There are some complications to that explanation, involving the combined rotation of the hip, shoulder, elbow, and wrist, the mass and flex of the atlatl and projectile, and . . . well, just check out this article if you're interested. It's a long, detailed, and fascinating look at the physics of atlatls. 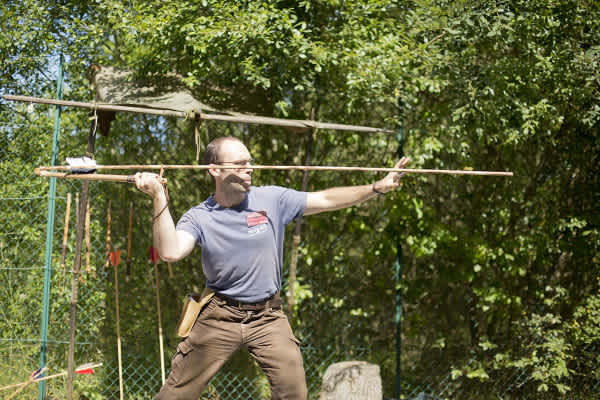 So how can you take advantage of this prehistoric ballistic technology? Using a real atlatl, like the man in the photo above, takes practice, and atlatls aren’t exactly available at your nearest sporting goods store. And while I haven't checked with senior management, I feel comfortable saying that the Science Museum's official position is to NOT recommend hucking spears, darts, and arrows around your neighborhood at 100 mph. It's dangerous and, at the very least, impolite. But you can use the principles of an atlatl without turning your block into the Hunger Games—you just need a device that will lengthen the arc of your throwing arm. You can do that by making your own "ChuckIt." Or you could buy a ChuckIt, but where's the fun in that?

What you will need:

Drop the ball into the sock or the tights leg, move it down to the toe, and then securely knot the fabric just above the ball. Or, if you have rope and a drill, you can drill a hole through the tennis ball, thread the rope through the holes, and knot the rope so the ball is secure on the end of the rope. There are photos and instructions for both options here.

Hold the end of the sock/rope furthest from the ball, swing it over your head, and release the sock to throw it. Make sure you’re throwing outside in an area with no people, animals, or fragile objects.

The sock (or rope) extends the lever of your arm and lengthens the arc of your throw, similar to the way an atlatl works! Compare how far you can throw a regular tennis ball with how far you can throw your sock-ball. Try experimenting with when you let go of the sock to throw the ball as far as possible. You won't be taking down any mammoths with your device, but you can play a very socially distanced game of catch.

Discover tons of free resources you can use virtually or in person created by our STEM education team.