Now open for visitors!
Read our reopening FAQ to learn more and book in advance.

Minnesota culture, past and present, through three local artifacts

From the valley of the St. Croix River to the mountains of Laos, our ethnographic and archaeological collections contain items big and small created by humans from across the world.

Since the Science Museum’s creation in 1907, the anthropology department has been researching and creating exhibits that look at the wondrous ways that we humans, both past and present, have been affected by our biology, societies, and cultures. Dive into the background of three amazing artifacts found here in Minnesota to explore how people once lived (and continue living today). 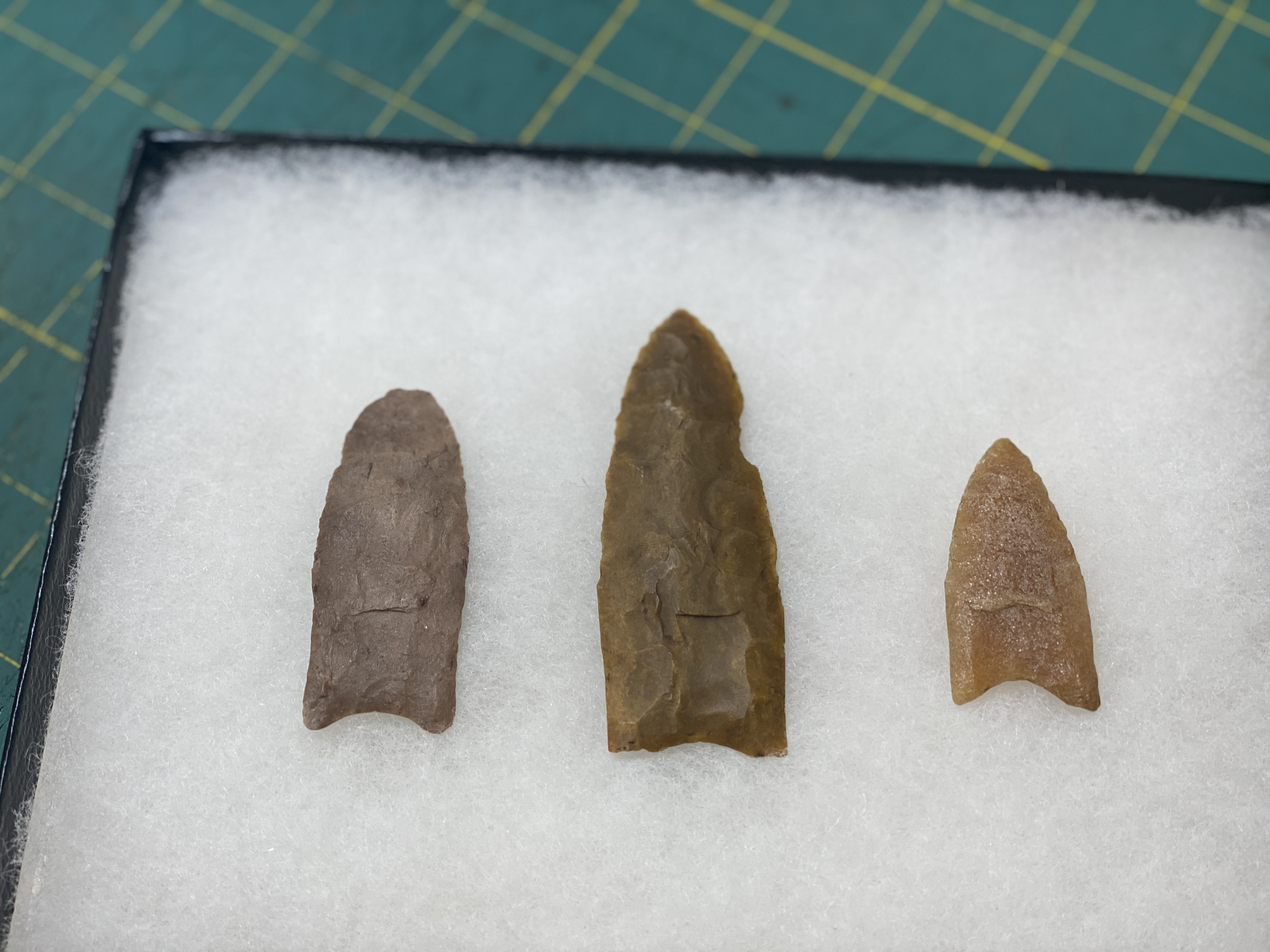 These Clovis-style stone spear points were found in Minnesota, but amazingly, the materials they are made from came from out-of-state.

These people lived in small groups that were highly mobile, so they didn’t leave many artifacts for archaeologists to find them. The most common evidence is distinctive, finely-made Clovis-style stone spear points.  Including these three points, only about 30 Clovis points are known from Minnesota.

Spear points from this time are often made from stone that had to be obtained great distances away from where archaeologists find them. This is an indication of how far these groups moved around. For example, the artifact on the left is made from a stone that is available near Devil’s Tower in Wyoming. The other two are stone materials that can be quarried in western Wisconsin and southeastern Minnesota.

These spear points were purchased from a private collector to be given to the Science Museum of Minnesota so they can be publicly available for study and inspiration.

Fishing lures from the past and present 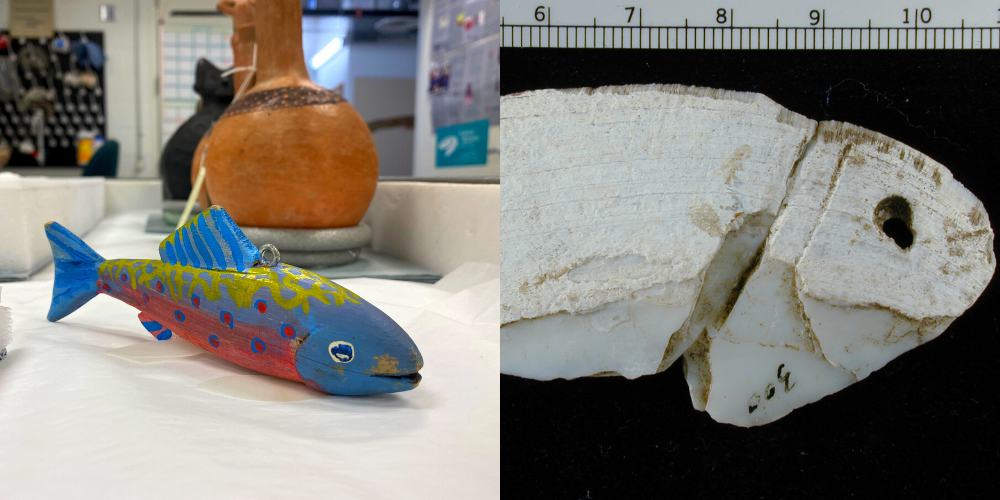 Ice fishing in the winter is a Midwestern tradition that goes back 1,000 years or more, and these two fishing lures show us how some traditions endure over time, change, and adapt.

After cutting a hole in the ice, Indigenous fishers living along the lakes and rivers of Minnesota used carved decoys to lure fish to the hole, where they speared them with a forked spear.

Archaeological evidence for decoy carving takes the form of lures carved from mussel shells, like the lure on the right. This lure comes from a culture grouping called Oneota, and it (the lure and the culture) predates the Ojibwe migration to the western Great Lakes. It is most closely affiliated with the Ioway, Ho Chunk, and Oto.

Artists long ago probably also carved decoys out of wood, which usually decayed over centuries. But wooden fish decoy carving is a living tradition practiced by Ojibwe carvers of Minnesota, Wisconsin, and the Great Lakes region and is used by Indigenous spearfishers today. 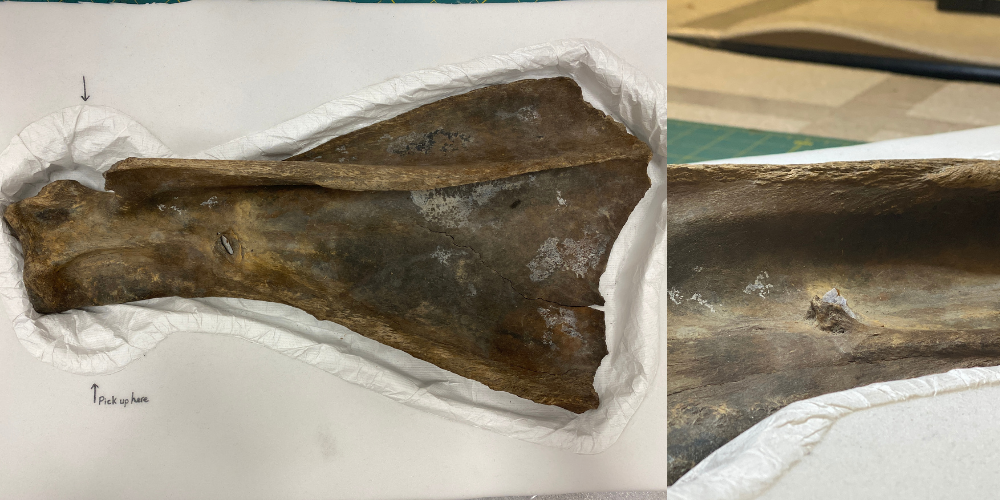 In Northfield, kids were having a fun summer day swimming in a lake. After jumping off the dock, they stepped on what they thought were branches buried in the muck, but instead, they found bison bones!

One of the bones they found was this scapula from an adult bison which carried its own story in the form of an embedded projectile point from a weapon. The point and wound tell us several things:

1. Although part of the point is broken, the style of artifact indicates that people hunted this specific animal about 1,000 to 1,200 years ago.

2. The stone that the projectile point is made out of is a material that can be found in eastern Minnesota, especially along the Mississippi and St. Croix valleys.

3. Remarkably, the bone healed and grew around the stone point, preserving it (uncomfortably ) in place.

So this bison lived with a point in its shoulder, at least for a little while.

Did you love this mini anthropology collections tour?

Try making your own archaeological dig at home or explore the St. Croix River valley through pottery with Dr. Ed Fleming in this science story.

From scientists to equity and education leaders, meet the people who turn on the science here at the museum.